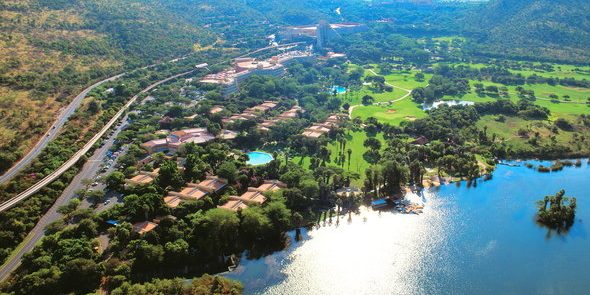 Pilanesberg International Airport (NTY) is a small airport located in Pilanesberg, in the North West province of South Africa. The airport is situated close to nearby attractions such as Sun City and Pilanesberg Game Reserve and serves as an easy access point for those wishing to explore the area. There are no scheduled flights available, but private charter jets offer flights to and from the airport.

The Pilanesberg International Airport is one of the main public air routes to the amazing holiday destination of Sun City. In fact, the airport was built mainly to facilitate access to Sun City as well as to the numerous game reserves in the Pilanesberg area.

Today this airport provides a fitting gateway to the Sun City Resort with its strong ethnic-style architecture and Botswana characterization. Visitors arriving at the airport immediately feel as if they have been transported to the heart of the country as they notice visually intriguing thatched roofs and traditional African patterning. Even though the airport has experienced a drop-in passenger numbers over recent years, it still receives regular flights and the asphalt tarmac receives roughly 11 000 passengers per a year. Make sure you’re one of them for a unique African experience.

Air trackers is a hot air ballooning company that operates within one of the most beautiful locations in the world, the Pilanesberg National Park in the North West province. Being one of the only hot air balloon companies in Southern African that operates from within a National Park, visitors can look forward to Big Five sightings from their elevated haven. The hot air balloon flights are conducted in the early morning and you should allow at least 4 hours for the excursion. Please note that a minimum number of guests are required to conduct a flight.

The world class Sun City Casino is of South Africa’s premier attractions, situated at the Sun City Resort in the North West province of South Africa. The casino is known as the most luxurious casino complex in the country and is open 365 days a year. Sun City features fantastic children’s entertainment such as train rides, mini golf courses, mini cars, trampolines, playgrounds, an animal world, and a world-renowned water park. A variety of restaurants and bars are available in the complex, where one can enjoy anything from international cuisine at Crystal Court to Italian food at Villa del Palazzo.

The Sun City Theatre is a world-class entertainment venue located in Sun City, in the North West province. Take a break from game viewing and end the evening off with an entertainment extravaganza. The theatre hosts everything from local productions to concerts by international artists. Famous stars to have graced the stage include Frank Sinatra, Black Sabbath, Tina Turner, Bryan Adams, Rod Stewart, Roxette, Michael Buble, and more.

Tumbling water flowing through a tropical for...